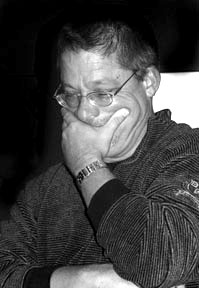 In a special ceremony at Rocklin High School, H. L. Hall, JEA’s past president, and Linda Puntney, JEA’s executive director, praised Nichols for his work at Rocklin High School and for his work nationally with yearbook staffs. They also presented a plaque to recognize him for his “outstanding accomplishments and significant contributions to scholastic yearbook journalism.”

Nichols has advised yearbooks for 23 years, 11 at the junior high level, 11 at the high-school level and for one year at Burris Lab School in Muncie, Ind. while a graduate student at Ball State University.

He began an internship at his local paper the summer after he graduated from high school, and he became the sports editor of the 10,000 circulation paper when 18. He served as sports editor from 1972-1979. He wrote, photographed, designed and edited 1-2 broadsheet pages per day covering five area high schools and Sacramento regional sports for the Roseville Press-Tribune. In 1978 the paper won a California Newspaper Publishers Award for Best Local Sports Coverage in 1978 and Nichols won a Best Feature Photo Award in 1977.

Nichols received his master’s degree in journalism at Ball State University. His thesis was on “Meeting Yearbook Deadlines: An Analysis of High School Programs, Sales Representatives and Yearbook Publishing Companies.”

He returned to his alma mater, Eich Intermediate School in Roseville, Calif., where he became involved in national organizations and competitions, served on national and state boards and developed one of the strongest junior high programs in the country.

In 1994 he decided to take on the challenge of creating a high school journalism program at Rocklin High School, a new school, only one year old, with only freshmen and sophomores at the time. There were seven students on the yearbook staff that first year. From one journalism and one yearbook class the first year, Rocklin now has seven classes directly related to publications. He no longer advises the newspaper, but he does teach Publications I, II and III as well as Photojournalism. He has more than 100 students involved in yearbook production, and he teaches an approved course for editors called Journalism: Production Management. The publications classes are part of the largest elective department on campus: Communication Studies. More than 450 students take photography and 180 take Graphic Communications. Casey serves as department chair of the program, which directly and indirectly supports teaching journalism with seven full-time teachers, 42 sections and more than 1,200 students involved.

Nichols said “the energy and size of the yearbook program is built around a simple motto: We create a yearbook ‘for students, about students and by students.'”

In his 11 years at Rocklin, the Tonitrus has earned Crown and Pacemaker recognition as well as Best of Show recognition.

Nichols said he “loves few things more than opening that first box of books with the editors and breathing in that ‘new book’ smell, for me the great joy, the great lesson, the great blessing of being a yearbook adviser is the process of creating the book and coaching the people who create it. After all these years a day never goes by that I don’t learn some little life lesson from my job-often having nothing to do with yearbook. It may be how to handle a new kind of student, or taking a deep breath when the network crashes. And it may be directly related to yearbook.”

His greatest joy, he said, “comes in helping students discover the ‘could’ in a challenge. The challenge is creating a history book for this school year that also entertains. The ways to do it are probably limitless, but finding the best solution for this group of students producing the book for this school and its students this year is like seeing a beautiful mountain off in the distance and working our way toward it. Sometimes we stumble and get lost, but sometimes we find a new way of seeing that changes the entire experience. Problem solving is a life skill yearbook students carry with them well beyond high school. For me, too, the cycle of yearbook is a rebirth waiting to happen. Each year brings a new set of staffers, new stories to tell and a whole new set of possibilities. This constant reinvention has made the whole process more fascinating now than when I began.”

Nichols shares his enthusiasm for yearbooks with students and teachers around the country. He has taught at several university and company-sponsored summer workshops. He’s also critiqued yearbooks for various state and national organizations, and he has written articles for JEA’s magazine, Communication: Journalism Education Today, Quill & Scroll, J-Communique, and Adviser & Staff magazine. His thesis was published by the Columbia Scholastic Press Association, and he co-authored a junior high yearbook curriculum guide entitled “Caught in the Middle.”

JEA will recognize all three teachers at the JEA/NSPA spring convention in Seattle in April.