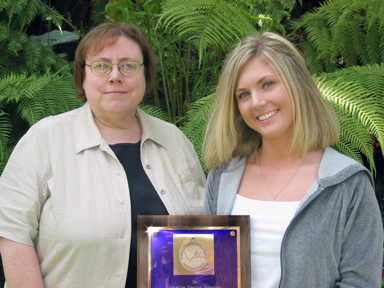 Kathy Craghead and Lauren Miller, 2004 Student Journalist of the Year

The 2004 student Journalist of the Year competition required the review of state winners from 34 states. Thursday, 15 judges from all seven JEA membership regions selected four runners-up and one national Student Journalist of the year. Each portfolio was evaluated on quality, scope and impact in five areas: skilled and creative use of media, inquiring mind and investigative persistence, courageous and responsible handling of sensitive issues, variety of journalistic experience, sustained and commendable work with community media.

These four students were selected as runners-up in the competition and will each receive a $2,000 scholarship to a college of choice continue journalistic pursuits.

Abha Bhattarai is editor-in-chief of the Connally Connections at John B. Connally High School in Austin, Texas where she has been immersed in journalism for more than four years. Her portfolio exhibited a wide range of writing skills from a feature on a teen racecar driver to shoplifting to the untimely death due to a heart attack of a fellow student. Bhattaharai interviewed her school superintendent and chief financial officer to compile an exclusive story regarding major staff cuts at her school after Texas cut 23 percent of the district’s budget. These staff cuts impacted class sizes and forced major curriculum changes in a school where the state achievement tests and the No Child Left Behind laws reign supreme. In addition to her wide range of experience in scholastic journalism, Bhattarai has published in the Pflugerville Pflag where she interned for four months and at the Austin American-Statesman for several weeks last summer. She has been accepted at Northwestern University where she will study print media.

Paul Gleason, attends Annandale High School in Annandale, Va., where he is editor of the A-Blast newspaper and maintains the newspaper’s online edition as well. His portfolios is packed with creative newspaper pages and web designs on CD; risk taking stories that dealt with the death of an Annandale student in a gang related crime, racial insensitivity and the UN’s push for authority in postwar Iraq. Gleason was also instrumental in breaking down competitive barriers between the newspaper and yearbook staffs at his school. His expertise in computers served the Annandale schools well as Gleason set up a lab of 30 iMacs, including installation of all software and networking peripherals. He has also trained his staff how to use InDesign, and he has the taught yearbook to refine their skills in digital imaging. He also instructed both staffs in Web design protocols. In the summer of 2003, Gleason served as an intern at the Alexandria Gazette. Gleason plans a career in web design or film production at Towson University.

Jennifer Miller, hails from West Chester, Ohio. Her portfolio provides broad documentation of her work for the past three years on the Voice newspaper staff at Lakota West High School. In her quest to provide broad and hard hitting coverage at Lakota West, Miller has written stories that address controversial athletic transfers and recruiting practices of a neighboring school district. She also investigated ethical issues such as electronic file sharing/stealing and the homophobic retaliation and threats against students who participated in the Gay/Lesbian Alliance at her school. Although stonewalled by individuals she needed to interview after the story came out, Miller prevailed and the newspaper has received wide support from students and community members. When she is not guiding her staff to provide the student body with quality journalism, Miller writes the intro scripts every two weeks for the morning announcements broadcast at Lakota High School and creates page designs for a monthly teen page published by and for teens in The Pulse Journal the West Chester community paper. She plans to pursue a career in newspaper or broadcast journalism at Ohio State University.

Chelsea Schneider knows journalism and lives it. As editor-in-chief of the Warren Central Owl, Indianapolis, Ind., she demonstrates quality in writing, design and leadership. Her ability to handle sensitive issues such as children from broken homes, survivors of domestic abuse and the impact of economic development on the community near Warren Central High School have impacted a whole community. Her compilation of trendsetting designs, well-written stories and public broadcasts on a local community newscast, make her portfolio bulge with quality journalism. Schneider’s ability to get to the heart of the matter emerge as she writes stories in the community newspaper Image on such topics as high education opportunities for minorities in her community, hospital funding activities and personality features of community members. Schneider is also a staff writer for her high school yearbook, The Wigwam. Schneider has been accepted at Franklin College and Ball State University. She plans to pursue a career in public relations at one of these schools.

Our student journalist of the year will receive $5000 to pursue a career in some aspect of journalism.

The 2004 Student Journalist of the Year is Lauren Miller from Mexico High School in Mexico, Mo., is a well-versed journalist who started her journalism career in elementary school when she decided her classmates needed a newspaper. She has been writing ever since. Her love for words helps her guide school’s newspaper staff to a variety of awards given by the Missouri Interscholastic Press Association. She has also used her skills with words to win the National Federation of Press Women, Missouri Affiliate first place award in opinion writing. Miller has earned numerous individual writing awards from the Missouri Interscholastic Press Association documenting her skills in news writing and sports writing. She earned semi-finalist status in the Earnest Hemingway Writing Awards sponsored by the Kansas City Star in the commentary category for her first person story, Kin Courage, of her family’s struggle to help her mother survive breast cancer.

Later, this month Miller will be honored by the Mexico Ledger with a Community Literacy Award. Her readership boasts 9,000 because her student newspaper is inserted in the Mexico Ledger, her community’s newspaper. As the result of her work, Miller has impacted a wide variety of readers. Her portfolio includes letters from those readers including her school superintendent, who praised her for tackling the story of their state assessment scores and the impact No Child Left Behind laws to a 1958 graduate of Mexico High School for her commentary on teen time management. Besides writing for her student newspaper, she free-lances for the Mexico Ledger. Miller has used her way with words to win five first place speech tournament awards in radio news writing and announcing. She has proven that a girl from a small rural high school can make her mark with words on more than her peers, teachers and community members. Miller plans to pursue a career in newspaper and magazine print journalism at the University of Missouri. She is recognized across the state of Missouri because she takes to heart her state’s “show me” motto. Therefore, JEA is proud to show her that her efforts in scholastic journalism are worthy of national recognition.