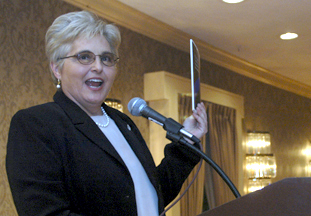 She received the award at a luncheon at the Hilton Washington, in Washington, D.C., on Saturday, Nov. 22. Finke spoke at the luncheon about the situation leading up to this award.

JEA’s Administrator of the Year Award is given to a school administrator who has shown a dedication to journalism education.

Finke, a first-year principal, stood by her journalism teacher and students at Chamblee High School last fall in a controversy involving Dr. Johnny E. Brown, the new superintendent of DeKalb County Schools, and two stories published in the school’s student newspaper about him and his new policies.

“The furor followed articles written in the Blue and Gold student newspaper by Alan Simpson and J.C. Boyle, who raised questions about Brown’s district policy changes, including a new dress code and a reading program. In the news article written by Simpson and the editorial by Boyle, Brown’s record as the previous superintendent in the Birmingham, Ala., school system also was put under a microscope. The student journalists reported on what they described as Brown’s self-appointed pay raise and a subsequent teacher walkout.

“The Blue and Gold was distributed to students and teachers at Chamblee Sept. 18 (2002). The remaining 87 copies, which were meant to be distributed to other area schools and to advertisers, were removed Sept. 20.”

As a first-year principal, Finke showed courage and unwavering support for adviser Diane Shearer and students of the Blue and Gold staff throughout the three days when both Finke and Shearer wondered if they were going to lose their jobs. It is for these actions that JEA is honoring her with this award.

In her letter of nomination for the award, Shearer wrote, “While [Ms. Finke] was very badly frightened and intimidated in [a meeting where she was summoned by the superintendent], she remained calm and totally supportive of me and the staff. She was also thoroughly professional…”

Nothing in Finke’s past education, teaching or coaching experiences “could have prepared her for those events last fall,” Shearer said. “And nothing in that resume would hint that she would be such a strong and brave supporter of the First Amendment rights of student journalists as well as stand solidly behind a very frightened adviser.”

“She never wavered in her trust in me,” Shearer added. “She continues to be one of the Blue and Gold’s most enthusiastic supporters and frequently hands out copies to visitors to Chamblee High. I recommend her without reservation as Administrator of the Year for the unwavering commitment she has shown to scholastic press freedom, for her honesty, and for support of the Blue and Gold during a crisis she handled with great professionalism even though it had the potential to damage her career.”