The Journalism Education Association (JEA) honored Jack Dvorak, professor of journalism at Indiana University, with its Carl Towley Award during the organization’s national convention. The award was presented at a luncheon at the Hilton Washington, in Washington, D.C., on Saturday, Nov. 22. Dvorak spoke about heroes at the luncheon. 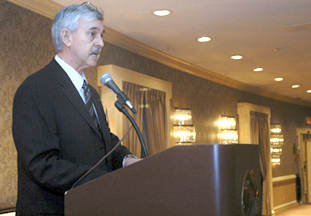 Jack Dvorak, Indiana University, accepts the Carl Towley Award Saturday afternoon at the JEA/NSPA Adviser Recognition Luncheon. “My heroes are all of you high school teachers and advisers,” he said. “During this weekend before Thanksgiving I’d like to thank you for doing such a wonderful job.” Photo by Jeanel Drake.

Dvorak, a Master Journalism Educator, has worked tirelessly throughout his career to legitimize scholastic journalism.

Work of JEA’s Commission on the Role of Journalism in Secondary Education, undertaken 20 years ago, relied heavily on Dvorak’s statistical studies conducted through the American College Testing Program.

Because of Dvorak’s statistical studies and findings, Julie Dodd, journalism professor at the University of Florida and one of four who nominated Dvorak for this award, said, “the Commission’s final report had much more credibility to an audience beyond scholastic journalism advocates, such as school administrators at the high school and university levels and professional journalists.”

Also nominating Dvorak for this award, John Wheeler, Commission chair, wrote, “He brought a scholar’s perspective to Commission proceedings, reminding the group that more than surveys and anecdotal evidence were needed if JEA were to persuade educational institutions that scholastic journalism was valuable.”

“This is one of the most significant books in the field in the past 20 years,” Dodd said.

Dvorak’s second major role for JEA has been in establishing its program to provide national certification for journalism educators. He served on the original committee to create JEA’s certification program and has continued to serve on the Certification Commission, the body that oversees the program, as a valued consultant, especially in formulating and evaluating test questions.

“When the Certification Committee met at the Freedom Forum to develop the program,” Dodd said, “Jack had recently worked on developing teaching assessment tests for Indiana and brought that experience to the development of the JEA certification exams and the approach to the scoring of the exams.”

Dennis Cripe, associate professor at Franklin College and director of the Indiana High School Press Association, credits Dvorak with leading Indiana’s journalism standards committee to a successful battle in adding journalism as a stand-alone license in the state.

Through programs he directs at Indiana University, Dvorak is actively involved in enhancing journalism at the high school level. Each year he coordinates a spring media writing competition on the IU Bloomington campus, attracting students from throughout the state.  Each summer he directs the High School Journalism Institute, more than a month of workshops for both high school students and advisers.

Another of Dvorak’s nominators, Linda Puntney, JEA Executive Director, wrote, “Although he hasn’t advised a publication in decades, his influence on scholastic journalism has made it possible for thousands of others to be more qualified, more informed and more empowered advisers.”